We performed corrosion testing on four oils and three additives based on the American Petroleum Institute (API) methods for automotive oils. We used a cyclic humidity chamber and matte finish SAE 1010 low carbon mild steel test panels. The water in the chamber was mildly acidified with hydrochloric acid.

The panels were dipped at ambient temperature 75 degrees F. and allowed to drain for 30 minutes. They were then suspended in an oven at 220 degrees F. for 30 minutes where they continued to drain/drip. This was done to simulate engine shutdown.

The samples were placed into the humidity cabinet. The temperature in the cabinet cycled between 65 degrees F. and 100 degrees F. every 24 hours. This cycled the samples around the dew point demonstrated by condensation on the panels. We checked the samples once per day for corrosion. 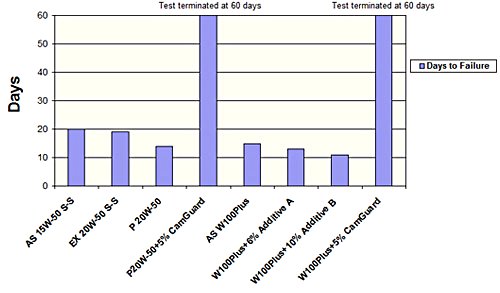 The crankcase of an airplane engine is an aggressive environment. Blow-by contains partially combusted and raw fuel components, combustion gasses, and water. These contaminants lead to a hostile acidic environment promoting corrosive/erosive wear that can dramatically reduce engine life. Hydrochloric* acid was used to simulate the acidic/corrosive environment of the crankcase and to increase the severity of the tests. We terminated the testing at 60 days for the CamGuard samples more than tripling the protection time of the best oil. See Figure 1.

*Hydrochloric acid was selected because of its use in the standardized ASTM testing protocol for certifying automotive engine oils. The Ball Rust Test (BRT) is currently utilized to qualify passenger car motor oils for ferrous metal corrosion protection. It exposes a polished steel sample ball, in the test oil, to a mixture of hydrochloric, hydrobromic, acetic acid, water and air.