We performed wear testing of four oils and three additives was performed utilizing a FALEX Tribometer at a third party analytical laboratory. The FALEX PIN and V-block is a well-known tribometer that is used for many standardized lubricant tests. These include the ASTM (American Society for testing and Materials) D-2670 Standard Test Method for Measuring Wear Properties of Fluid Lubricants and ASTM D-3233 Standard Test Method for Measurement of Extreme Pressure (EP) Properties of Fluid Lubricants. 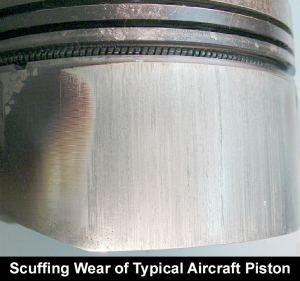 The test procedure utilized here is a derivative of the ASTM D-2670 and used by Phillips Petroleum and described in the Journal “WEAR” Volume 84, 1983. The Phillips test correlates very well with camshaft wear in automotive engines using gasoline engine oils. The loads in this testing were then reduced from the above reference and specifically selected to demonstrate effectiveness of the antiwear additives in commercial aviation oils. Aircraft engines were designed before there were antiwear oil additives. The engines were designed with wear surfaces hard enough and cam/ lifter and piston ring/ cylinder load pressures low enough that a film of heavy oil was enough to prevent excessive wear.

The test procedure consists of heating the test oil to 250 degrees F. and then with the pin rotating at 290 RPM slowly ramping up the load to 150 pounds and running for a three minutes break-in. The load was then stepped up to 250 pounds for 1 minute and then stepped up to 350 pounds. The total run time is 3.5 hours with aconstant 350-pound load. The PIN and V- blocks are then cleaned and the total weight loss is measured and reported.

Ashless additives such as the triaryl phosphate ester functional fluids including tricresyl phosphate (TCP), butylated triphenyl phosphate (BTPP), and isopropylated triphenyl phosphate have historically been utilized as load carrying, plasticizers and flame-retardant additives in many applications. They are utilized extensively in turbine engine oils. These additives have never demonstrated useful performance in automotive applications i.e. the camshafts quickly fail. Automotive gasoline and diesel engines depend on the use of zinc diakyldithiophosphate “ZINC” for antiwear protection.

Like other bench tests, this is an accelerated test. The loads and initial temperatures of this test were specifically selected to test the antiwear capabilities of these oils and additives and not their extreme pressure (EP) properties, which occur at significantly higher loads. It is important to remember that even non-dispersant mineral oil passes the aviation certification test and consists only of basestock and antioxidant. The ashless dispersant (AD) non-antiwear additized oils have all successfully passed certification testing and it is important to note that this is a test to compare the antiwear additive chemistries under conditions just beyond those found in an engine. The test conditions were determined by using conditions that are just severe enough that the unadditized oils fail. Only after a great deal of testing under a wide variety of conditions was it determined that this procedure could be used to test the antiwear additive’s effectiveness. 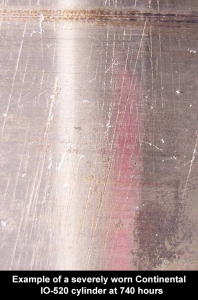 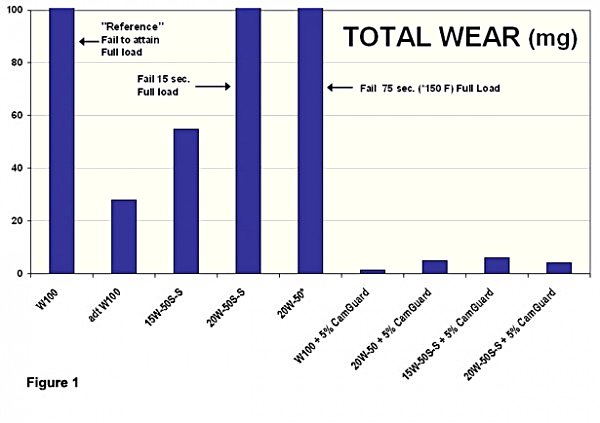 Figure 1 shows the results of tests at the selected conditions. The samples that did not make it up to the final load, 350 pounds, are shown as failing and marked accordingly. The samples that made it to the final load but did not run the full length of time, 3.5 hours, are shown as failing and marked accordingly. The W100 failed just before it reached the 350-pound final load and was chosen to be the reference for additive testing. The 20W-50 failed at 75 seconds but at a much lower starting temperature of 150 degrees F and could have been used as the reference as well.

The additized W100 Plus and the leading semi-synthetic (15W-50 SS) both of which claim antiwear protection performed well. The 15W-50 gave a total weight loss of 54.9mg and the W100 Plus gave a total weight loss of 28mg. The new semisynthetic 20W-50, which makes antiwear claims, failed 15 seconds after reaching the final load, in 5 seconds and 10 seconds in repeat tests. CamGuard was added to both of the semi synthetics the 15W-50 SS and 20W-50 SS and demonstrated excellent results with 6.1mg and 4 mg weight loss respectively also shown in Figure 1.

Additive A, a well know product, in W100 demonstrated no benefit over the W100 by itself as the sample failed to reach the final load. The metal parts, the oil and Additive A were heated and cooled multiple times per the manufacturer’s recommendations. Additive B, polymer resin, in the W100 sample made it to the final load but failed after 15 seconds. CamGuard in the reference W100 sample passed with a total weight loss of only 1.5-mg. The results are shown in Figure 2. 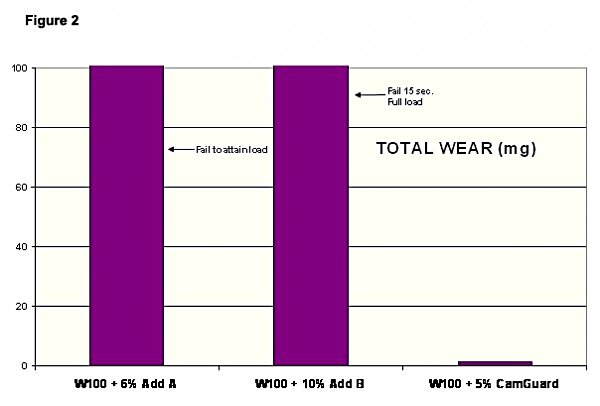